Yūji Endō (遠藤 勇次) is a dirty loan shark with ties to the yakuza. He lends out large sums of money to desperate individuals but charges absurd (and illegal) interest rates. He is a major antagonist in the series.

He tracks down Kaiji after a client of his, Furuhata, who disappeared without repaying a loan, which Kaiji cosigned in an act of weakness. Recognizing Kaiji could never repay the loan, Endō offers him the opportunity to board the gambling ship Espoir, where he would be able repay his debt and make some money as well.

After losing on the Espoir, he offers him another opportunity to pay back his debt by participating at the Starside Hotels gamble, not revealing what the gamble actually is. Sahara, wanting a chance to score big, pleads to Endo to include him with Kaiji.

After bringing Kaiji and Sahara to the event, he is not seen again in the arc.

After Kaiji defeats Tonegawa his organization suffers because they now lack any connection to the upper management of Teiai.

When Kaiji approaches him again after being defeated by Hyōdō, he drugs Kaiji and sends him unconsciously to the Teiai underground labor camp to pay off his debt to him by working there.

After Kaiji is released from the underground labor camp and witnessing Sakazaki's failed attempt at beating the Bog, he goes to Endō for a loan to get enough money to pay for the equipment to beat it. He, Kaiji and Sakazaki form an alliance by signing an agreement contract.

Endō helps Kaiji borrow ¥50 million to beat the Bog and protects the Bog from being tampered with when it starts clogging up. Towards the end battle with the Bog, Endō loans Kaiji another ¥10 million at a very high rate of interest. Due to Kaiji's desperate state he fails to read the contract he signed or the interest rate he agreed on.

After Kaiji's victory, he drugs Kaiji one last time and takes the money he owed him, while expressing disgust toward Kaiji's pointless code of chivalry when he decides to split his winning to his friends in the underground labor camp. Despite his underlings remark of his cruel treatment toward Kaiji, he states that he could have robbed Kaiji all his money if he liked to but he still has his code of conduct and then takes only the amount of money Kaiji owned him.

With Kaiji's debt with him finally paid with an additional amount of money he had taken with his high interest rate, his connection with Kaiji is finally concluded.

After the events of the Bog, he now has a higher position in the Teiai Corporation having blacksuits now working under him. He has been assigned to track down Kaiji, Chang and Mario and the money they took from their gamble in One Poker.

During the manhunt, he is shown to be quite cocky as he thinks he can understand Kaiji's movement to easily catch him, Mario and Chang but fails multiple times as Kaiji outsmarts him.

After finding out Kaiji's decoy truck scheme, he uses his experience in hunting debtors to eventually tracks down Kaiji's mother's apartment to get more information about Kaiji from her, putting Kaiji in deep trouble.

As he and his men break into Kaiji's mother apartment with his men after waiting for his mom to leave the apartment, he dismays to find out that Kaiji is nowhere to be found and his men cannot detect any signs of Kaiji escaping while he breaks into the apartment. He angrily orders his men to clean up the house and re-lock the door to avoid suspicion. Unknown to him, Kaiji had escaped in front of his nose by disguising as the neighbor who rides the motorbike to work in his family restaurant while the neighbor's mother wore his disguise to distract them. As none of Endou's men know what the neighbor looks like without his helmet, they never figure out how Kaiji escaped their gasp and all of them assumes that Kaiji escaped when two of the lookouts fell asleep.

He later seen in the KFC restaurant punishing his men by making them eat triple the amount of every single fried chicken he eats.

After one of the debtors report his detection of Kaiji near a bank along with uncovering the car rented by Kaiji that acts as a decoy, he begins to assemble a new plan to catch Kaiji, Chang and Mario. Due to Endo doesn't count on the usage of RV, Endo assumes that Kaiji and his group use railway train as a means of transportation by measuring the capacity of a briefcase to carry 2.4 billion Yen. He orders the blacksuits to stand guard at all the railway stations in Ibraki Prefecture to catch Kaiji, Chang and Mario. Thinking he could finally trap Kaiji but unknown to him, Kaiji, Chang and Mario successfully evade him and the blacksuits as they drive their RV passing through Endo's limo, without his knowledge. In the end, Endou's effort to entrap Kaiji is doomed from the beginning once again.

As Endou intensifies the lookout for Kaiji in all banks, train station, hotels across Japan after realizing Kaiji and his gangs has escape Ibraki, he gets into a phone frenzy as all the bounty-hunting debtors of Teiai give him false and misleading information about the whereabouts of Kaiji due to the hot season that causes people to wear face masks, making the army of debtors to get into identity mistakes multiple times. This causes Endou massive amount of stress so he has to stop taking the calls.

He eventually makes mistakes once again by assuming Kaiji, Chang and Mario buy golds to consolidate their money as he thinks that they stop going to the banks all together after realizing they are being constantly watched by Teiai debtors. He isn't aware that Kaiji, Chang and Mario still go to the bank to deposit their money but with different tactic that not even Endou manages to figure it out by going straight to the second floor of the bank that preserved only for residential loan and business financing to deposit their money. Taking advantage of the second floor narrowed space and the lack of needs for debtors to go there, Kaiji, Chang and Mario successfully evade Teiai army of watchdogs swiftly. Eventually, Endou abandons the idea of Kaiji and his gang buying gold as it is too heavy for them to carry around effectively.

During his camping trip with Yoshiro Kurosaki, he figures out Kaiji's usage of RV and absolutely enraged with his narrow-minded thinking.

After returning from the camping trip, he orders his minions to change their objective for the debtors to look out for RV. He then manages to track down the shop where Kaiji borrowed the camper van. When he met the owner of the shop, Takeshi Arima, he tries to feign ignorance and use manipulative words to make Arima to spill out information about Kaiji's group RV. However, Arima managed to deduct his shady demeanor and correctly recognizes that he is a loan shark, judging by his behavior of looking around his shop like a burglar. As the result, Arima doesn't budge a word about Kaiji's group and asks him to leave his shop if he has zero intention to buy or rent his vehicles.

Seeing Arima is too stubborn, Endou provokes Arima by kicking his vans and states that he knows Kaiji, but once again Arima won't budge. When Arima tries to make Endou to apologize for kicking his vans, Arima tries to attack him but Endou proves to be too good for Arima and he is beaten up by Endou. After leaving the shop, Endou realizes that he cannot crack Arima's deviant mindset so he decides to sneak into the shop at night to check for renting documents in Arima's office to track down Kaiji's RV number and type.

Unfortunately for him, Arima manages to call Kaiji in which Kaiji asks him to hide his renting paper, causing Endou to find nothing in Arima's office. When Arima comes back to his office the next day, he finds out that his drawer had been picked by Endou last night, just like what Kaiji has suspected.

He makes his appearance offering help to Tonegawa with the rehearsal of the newly created gamble; Restricted Rock, Paper, Scissors. Due to him misunderstanding the goal of Tonegawa, he only makes the situation worse.

He also abandons Masayan in the woods.

He encounters Tonegawa by chance on a train, while escorting debtors to the Espoir. After the debtors riot, he uses a speech Tonegawa was gonna use to calm them down. While it worked, he accidentally left Tonegawa without something to say in the same situation. 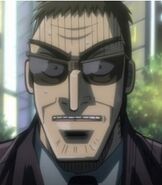 Yuuji left behind Kaiji's remaining money after taking the amount Kaiji's owed him. 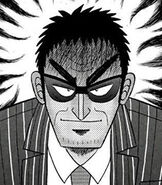 Endou fears of getting torture for failure.

Endou imagines himself being impaled.
Add a photo to this gallery

Retrieved from "https://kaiji.fandom.com/wiki/Yuuji_Endou?oldid=7363"
Community content is available under CC-BY-SA unless otherwise noted.