Yukio Tonegawa (利根川 幸雄) is who was put in charge of most of Hyōdō's events, acting as said man's right hand. He is a powerful business magnate and the third highest ranking executive in the financial firm Teiai Corporation.

He was the one who sponsored Restricted Rock, Paper, Scissors, Electric Current Steel Frame Crossing, E-Card, and presumably more.

He serves as the second main antagonist in the Tobaku Mokushiroku Kaiji arc.

He has a spinoff manga called Chuukan Kanriroku Tonegawa where he is the main protagonist.

A stout man of middle-age, Tonegawa has 30 years old, he is a staunch realist, believing those who risk their lives in Love Emperor's tournaments to be street trash at the mercy of society and those with superior abilities and initiative. By reputation Tonegawa is a master of human psychology and the art of observation, displaying acts of insight so profound his abilities appear supernatural.

In the spinoff manga he appears to be less calm and more stressed and emotional compared to his depiction in the main series due to Hyōdō's more comedic antics and abuse towards him.

In the anime adaptation he manages to maintain his stern demeanor as depicted in the main anime series, though it is clear he is still terrified of his superior and struggles with the stress of his job.

Tonegawa holds a certain amount of envy and hatred towards Kurosaki, since the man can correct and criticize Hyōdō without being punished. Kurosaki succeeded Tonegawa after he is defeated by Kaiji.

He is first seen intimidating a debtor and took everything he owned. He is later forced to come up with Death Games to satisfy Hyōdō's wishes. He created the Blacksuits to create death games, though not before telling them to introduce themselves so he can tell them apart. In the end, the meeting ends on an unproductive note as Tonegawa tries to just remember everyone's names. He attempts to come up with ideas at the second meeting, but all the Blacksuits remain silent out of fear of Tonegawa. He decides to use the fact Hyōdō ordered the project and the promise of promotions to motivate the Blacksuits to come up with ideas. During a brainstorm, Hyōdō walks in and disrupts the mood. Tonegawa tries to get him to leave, but Ebitani inadvertently sabotages his efforts. Believing Hyōdō hated all of the suggestions, he rejects them all, (in truth, Hyōdō was tried because it was late and he was old). In an attempt to regain his honor and his subordinates respect, he takes them on a trip. He attempts to throw a barbecue, but it is nearly ruined when Yamazaki revealed that the grittles were rusted. Fortunately, he found a replacement, which was, unbeknownst to him was a torture device Hyōdō made. During their third meeting, he proposes a gamble called Human Mahjong, but Seamon turns it down for being impractical. Seamon then shows a powerpoint for Restricted Rock Paper Scissors. At first, he and the others reject his idea, but he and the others later become interested as Seamon explained the details and he decided to approve the idea, though only after changing the name to Restricted Rock Paper Scissors.

Tonegawa attempts to present the proposal for Restricted Rock Paper Scissors, but fails due to sleeping through the climax of a movie Hyōdō was watching. He later attempts to make the proposal to Hyōdō after Hyōdō's bathtime and using an eyebrow system (If Hyōdō's eyebrows are at a certain angle, he is in a good mood or if they are above a certain angle, he is in a bad mood) to tell if he is in a good mood, unfortunately, Hyodo was wearing a facial mask and Tonegawa couldn't tell if he was in a good mood. Desperate, he decides to go to Hawaii to make the proposal to Hyōdō and Hyōdō approves. He decided to take the Blacksuits bowling to celebrate, but the Blacksuits party too long and fail to show up to work on time. Even worse, in a misguided attempt to apologize to Tonegawa, the Blacksuit (minus Seamon) shave their heads, making it harder for Tonegawa to tell them apart.

As punishment, Tonegawa makes the Blacksuits compete against each other to select a venue for Restricted Rock Paper Scissors. After many failed attempts, Saemon proposes they hold it on the Espoir. Ebitani attempts to propose his own venue for the game, but goes overboard on the details and flops.

He would later encounter Ōtsuki in a restaurant not knowing the position each held in Teiai nor knowing that they were part of the same organization. Due to this, Ōtsuki manages to talk to Tonegawa normally without holding any fear despite Tonegawa having a severely higher position than him. They attempt to defeat the eating challenge Tonegawa bested before, but they both lose.

He is first introduced in the series as the sponsor on the Espoir and explains the rules behind Restricted Rock, Paper, Scissors.

After the Human Derby, he is again the sponsor behind the Electric Current Steel Frame Crossing and explains to the participants how they can obtain the prize money they were promised in finishing the Human Derby. He then sits down and gives commentary about the situation the participants face when they are crossing the steel beams.

After Kaiji manages to finish the Steel Crossing, he later serves as his opponent at the Starside Hotel in E-Card. Here, Kaiji is forced to bet an ear or eye to compensate for the amount of money being bet which he lacked.

In the gamble Kaiji manages to outwit him by realizing how he manages to monitor his emotions. He is defeated by Kaiji and is ordered by Hyōdō to apologize to him for all the misfortune he had caused Kaiji and his companions earlier.

Then, Hyōdō replied that no matter how much a person has begged for forgiveness they would never truly mean it and then ordered his men to bring out a massive smoldering iron plate where he ordered Tonegawa to kneel on it to Kaiji out of his sadistic pleasure. Tonegawa, showing how dedicated he was to his superior, manages to kneel on it based on his own will alone. Now heavily burned and unconscious, he is dragged away by his men in defeat.

Tonegawa's fate is left unknown. However it is certain that he was demoted from second-in-command in the Teiai Corporation. He was succeeded by Yoshihiro Kurosaki.

During the Bog arc, it was revealed that Tonegawa had won at the machine 1 year prior to Kaiji's arrival at the underground casino, and that Hyodo had won a couple of years before him. Kaiji seemed shocked at this reveal. Ichijō rigged the Bog so Tonegawa could win. 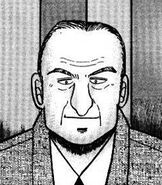 His first appearance in the manga.

Tonegawa painfully kneels in the Kneeling Plate Grill to apologize to Kaiji. 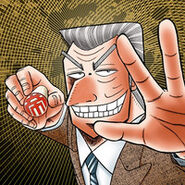 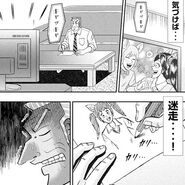 Being forced to carry his boss.

Tonegawa as a conductor

Posing with the new recruits.

Posing for a picture after defeating the pork cutlet.