Takeshi Furuhata (古畑 武志) is a debtor and one-time coworker of Kaiji whom he encounters again on the Espoir while near defeat in the gamble Restricted Rock, Paper, Scissors.

One year before the first tournament on Espoir, he lured Kaiji into cosigning a loan for him, making Kaiji liable in case Furuhata did not repay the loan.

Although believed to have disappeared, Kaiji discovers him on the Espoir and makes an alliance with him after Funai's betrayal.

He later on betrays Kaiji when Andō convinces him to ditch Kaiji. Unlike Andō, he is not enthusiastic about it and appears he was dragged along with Andō's decision showing how much he lacked any confidence in making his own decisions.

Kaiji manages to escape his cell by stealing the assets (in jewelry) of a fellow inmate named Okabayashi and blackmailing his comrades into paying his bail. After being released, he hits Andō and retrieves the badges he had taken from him.

After the events on the Espoir, they go their separate ways and he is never seen again in the series.

The start of all Kaijis problems in the series. 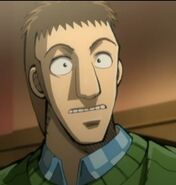 Add a photo to this gallery
Retrieved from "https://kaiji.fandom.com/wiki/Takeshi_Furuhata?oldid=6878"
Community content is available under CC-BY-SA unless otherwise noted.