Seiya Ichijō (一条 聖也) is the young manager of a casino owned by the Teiai Corporation. He has worked at Teiai Group for many years and is the favored ace of Yoshihiro Kurosaki.

He created the pachinko machine called the Bog. It was made in a way that it impossible for anyone to get the max payout unless he desires it to.

He is Kaiji's opponent in the later half of the manga arc and is one of the main antagonists in the Tobaku Hakairoku Kaiji arc.

He also has a spinoff manga called Joukyou Seikatsuroku Ichijou where he is the main protagonist.

Ichijō sports a red (black in the manga) mullet that reaches his shoulders. He is known to have a particularly effeminate look and values his appearance a lot.

In the second season, he wears a typical black suit, but it is accented by a red dress shirt and a white tie.

He is shown to be very confident person. He is shown to have a superiority complex about his own abilities, and looks down on other people like Kaiji or his former classmates. However when unexpected events happens, he loses confidence quickly and will do anything to solve the problem.

He first start his career by cleaning toilets at a casino owned by the Teiai Corporation. This is where he first meets Hyōdō, who orders him to drink wine from a basin he dipped his feet in.

He eventually gets promoted to manager and becomes a subordinate of Yoshihiro Kurosaki. Along with his right-hand Murakami, he runs an illegal casino which holds his creation, the Bog.

He is first introduced when Sakazaki attempts to beat the Bog. As Kaiji begins to observe and study the Bog from a distance, Ichijō is seen being warned by Yoshihiro about Kaiji which Ichijō brushes off.

For Kaijis plan to beat the Bog to succeed, he planned to plant a false reason to break the Bog by sneaking into the casino office. Here Ichijō catches him and uses a finger nail piercing device on Kaijis hand as warning for any future attempts.

Kaiji later returns with Sakazaki and Endou in his group where they start their final battle with the Bog. Despite eventually learning that the group must have been cheating to pass the barriers he has set up for the Bog to be unbeatable, Hyōdō calls in and forces Ichijō to continue with the gamble.

After a long battle, Kaiji eventually succeeds at beating the Bog. Hyōdō then demands that Ichijō pay back the ¥700 million Kaiji won by working for 1050 years in the labor camp. As Ichijō is dragged away, Kaiji encourages him to return and challenge him again.

He has yet to be seen nor be mentioned after the arc.

He is shown conversing and praising Tonegawa when he visits his casino to play the Bog.

Tonegawa comments himself on this as being treated like a child with the amount of work Ichijō was putting into his emotional outbursts while Tonegawa breezes through the Bog with ease (this is due to Ichijō secretly meddling with the Bog to make it easier for his superior to beat). Unbeknownst to Ichijō, Tonegawa already saw through this and didn't say anything.

Ichijou being abused by Hyodo in the past.

Meeting up with his "friends" who later talk behind his back.

A horrified Ichijou realizes he gonna be sent to work in the underground labor camp. 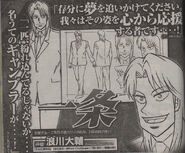 His character sheet used in season 2 of the anime and reused in The Slot Apocalypse Kaiji 3 pachinko machine. 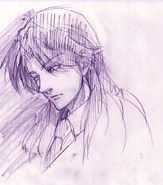 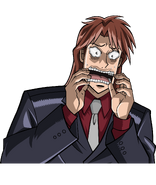 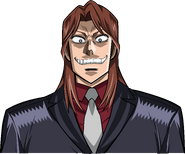 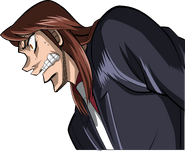 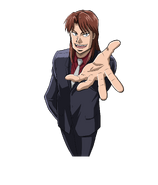 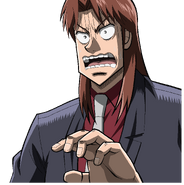 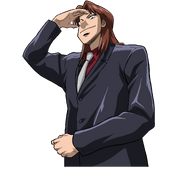 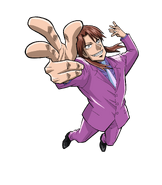 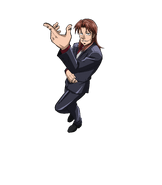