The Salvation game is a life-or-death game designed by Kazuya to test if the friendship between three men indebted to Kazuya--Mario, from the Philippines, Chang, from China, and Mitsuyama, from Japan--is a true bond.[1]

Kaiji is brought in as an observer to this game, and frequently cheers on the three men and challenges Kazuya's corrupted view of human nature.[1]

The three men sit in a stair case formation, strapped to their seats with seat belts which can only be released one at a time with a release button, and are not allowed to look behind them. They each wear a helmet with a light on the top.[1]

At the start of each round of the game, the current pot is doubled, and of the three men, one "savior" and two "hostages" is decided via the light on their helmets. The savior must release their seat belt after 30 seconds, but before 60, and press a button across the room, otherwise the helmets of the two hostages will crush their heads.[1]

They must use the powers of deduction and observation to determine if they are the savior or the hostage--the player at the top of the staircase is in the best position for this, as he can see the two other players' lights. Halfway through the game, Kazuya reveals that, if the savior fails to rescue the two hostages, he gets double the entire pot of the current round.[1] 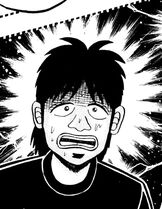 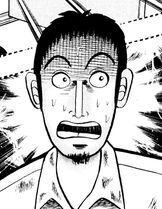 The helmet used.
They are later reused in One Poker 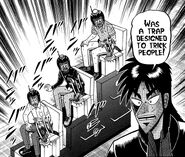 The game in action.
Add a photo to this gallery

Retrieved from "https://kaiji.fandom.com/wiki/Salvation_Game?oldid=6025"
Community content is available under CC-BY-SA unless otherwise noted.