perica (ペリカ) is a currency used and distributed by the Teiai Corporation.

It is what Teiai use to pay those who are forced to work under them due to debt. It is the main currency used in the underground labor camp.

They hold no value outside the company. When a worker manages to leave the underground labor camp, they convert the perica held by the worker into yen.

The design resembles that of play money used in board games. They have Hyōdō's face imprinted on them and they come in colors of green, blue and red. 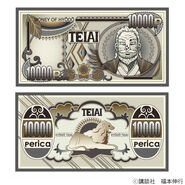 10k perica depicted in the board game

Add a photo to this gallery
Retrieved from "https://kaiji.fandom.com/wiki/Perica?oldid=6595"
Community content is available under CC-BY-SA unless otherwise noted.