One Poker is a card game designed by Kazuya to be played using two standard decks of playing cards.[1]

Rather than deciding the victor via hands such as straight, flush, etc., each hand consists of just one card and is ranked according to its normal value, suits not factoring into the value at all.[1]

Standard poker betting rules apply and the cards of both players are always revealed after betting even if one player folds (but they don't affect the outcome in that case).[1]

In addition, all of this is played on a table at the top of a large tower, a mechanical shuffling table designed by Kazuya named "Mother Sophie". The table is placed on a set of tracks, and moves towards the losing side's edge with each loss.[1]

The Teiai warehouse which holds the tower. 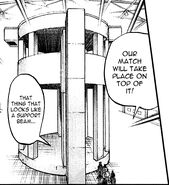 The tower which the gamble takes place on.

The pit, where the loser will be dropped to his death.
Add a photo to this gallery

Retrieved from "https://kaiji.fandom.com/wiki/One_Poker?oldid=7243"
Community content is available under CC-BY-SA unless otherwise noted.