Mamoru Andō (安藤 守) is a bespectacled, obese man who forms an alliance with Kaiji and Furuhata after losing all of his gesture cards while playing Restricted Rock, Paper, Scissors on the Espoir.

Kaiji initially finds him in the toilets of the Espoir and manages to convince him to help him and Furuhata in the gamble.

Kaiji gives him and Furuhata all his earned money and badges and is sent away to the back room hoping he and Furuhata will pay his bail and release him.

After receiving the money and badges from Kaiji, he has a change of heart when he has the money. With Kaiji being locked away, he betrays Kaiji in his pursuit for greed and redemption and refuses to pay Kaiji's bail to release him. He manages to convince Furuhata to side with him as well.

Kaiji manages to barely escape his cell by stealing the assets (in jewelry) of a fellow inmate named Okabayashi and blackmailing his comrades into paying his bail. He then hits Andō and grabs the badges he had taken from him.

After the events on the Espoir, they go their separate ways and he is never seen again in the series. 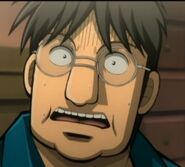 Add a photo to this gallery
Retrieved from "https://kaiji.fandom.com/wiki/Mamoru_Andou?oldid=7302"
Community content is available under CC-BY-SA unless otherwise noted.