Kazuya Hyōdō (兵藤 和也) is the youngest son of Kazutaka Hyōdō and Sophie. He enjoys gambles as much as his father. He works as a novelist and a high-ranking employee in his father's company, despite being looked down on by almost everyone in Teiai. In addition, he runs a company called "Kazuya Corporation", which deals in covering up murders under the guise of suicides or construction accidents

Unlike Hyōdō, he is shown to be a tragic antagonist rather than a purely evil antagonist.

He reveals to Kaiji that he detests the life he leads, and claims to not know true friendship or love, as everyone he meets kisses up to him due to the influence of his father but doesn't actually like or care about him. As a result, he thinks human beings are naturally detestable and likely to betray others, and additionally he finds no issue in wasting money for his gambles and schemes, and instead wants to be an author.

As a means of finding out if true bonds actually exist, Kazuya sets up a series of deadly games designed to test the bonds between people, which influence the ideas for his novels. Much like his father, he also has a tendency to abuse his employees.

Despite his sadistic and arrogant attitude, he is in fact miserable due to his envy for his older brother Kazuki, as he is always being cast aside and ignored by his father and almost everyone in the company. Though he doesn't show it, he has low self esteem, believing that everyone he's ever met has hated him. He also thinks that his mother cared more about his brother than than him due to her saving Kazuki first in an accident that happened when he was a child, though this is a misunderstanding. This results in his addiction to gambling to prove his worth and vent his frustration.

Once, when his father wanted to go to Hawaii, he took his father's private jet to Maldives.

Kaiji first encounters him at the casino Takashi Muraoka was running. Initially, he did not recognize him as the son of Hyōdō as Muraoka only referred to him as "young master".

After Kaiji loses all of his money during Mine Field Game “17 Steps”, he keeps loaning Kaiji money so Kaiji can continue to gamble; however, he tells Kaiji that if he cannot repay the debt then he will either be sent back to the underground labor camp or will have a random body part removed (which body part will be removed is determined by a lottery wheel). He also reveals that in the worst case Kaiji will have to be tortured and killed like 30 people ranging from 15 to 60 years old who lost their gamble with Kazuya.

After Kaiji's gamble, he offers him an opportunity to gamble with him. In his limo, he brings Kaiji to a graveyard to show him his grave in case he loses to him and makes him sign a contract for how his body will be managed. After signing the contract they relocate to a restaurant. Here he discusses human nature and shows Kaiji a gamble he created to the test of the bonds of friendship between three participants, the Salvation game.

After the conclusion of the Salvation game, he and Kaiji relocate to a warehouse where they do their gamble, One Poker. Before that, Kaiji insists to bring Chang and Mario with him to act as his support during the gamble to which Kazuya begrudgingly accepts.

After Kaiji defeats him in One Poker, he falls from the great height of the building as the condition of the loser, but Kaiji, Chang, and Mario manage to save him from the fall as an act of mercy. He is shown to be unconscious after they leave him to escape with the money he bet. Enraged with his son's condition and the loss of 2.4 billions Yen, Kazutaka commands the blacksuits and Endo to capture Kaiji, Chang, and Mario to get the money back.

Kazuya played with his toy as a child.

Kazuya reveals that he is Hyodo's son. 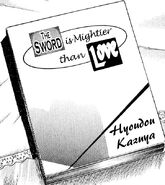 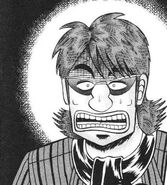 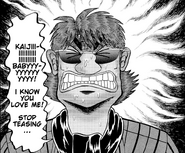 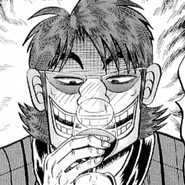 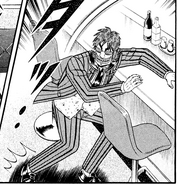 Kazuya thinking back about his childhood and his mother.

Kazuya vents his frustration on one of his blacksuits.

Kazuya clings to his life as he is about to fall from great height after losing his gamble with Kaiji.

Kazuya imagines himself falling to his doom.

Kazuya is found unconscious by one of the blacksuit.

Value Chart of Body Parts created by Kazuya for Kaiji to bet. 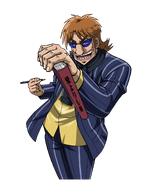 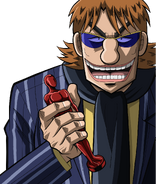 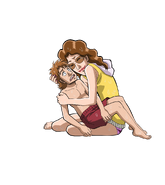 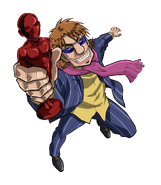 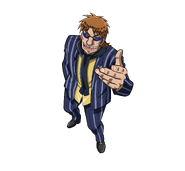