Kazutaka Hyōdō (兵藤 和尊) is a major recurring character in the Kaiji series, where he serves as the main overarching antagonist.

He is currently known to have two sons; Kazuya Hyōdō and Kazuki Hyōdō.

He is also a widower as his wife Sophie passed away prior to the series.

He also appears in the spinoff manga called Chuukan Kanriroku Tonegawa. Despite the series focusing on the Teiai Corporation, he still takes the role of antagonist as he constantly gives Tonegawa stress through his unreasonable demands.

Hyodo is a wealthy socialite and the president of the powerful financial consulting firm Teiai Corporation, not to mention the owner and the sponsor of numerous underground gambling tournaments like those on board Espoir. He primarily hosts and sponsors countless underground projects.

He is believed to be seventy years old and worth several hundred billion yen. Driven mad by wealth, conventional hobbies fail to entertain him, so he funds gambling tournaments to watch the destitute of society struggle against overwhelming terror and despair.

He enjoys doing bizarre and often disturbing stunts, which are mostly at the expenses of his own employees, like forcing them to drink from a bowl of wine that he put his feet in, and often goes far enough to humiliate anyone to get a laugh out of it.

It is shown that he also has favoritism toward his eldest son, Kazuki, while mostly neglecting his youngest son, Kazuya. However, in general, he is mostly a terrible father for both of his sons as he reprimanded them for things out of their control.

It is shown that it is possible for him to be in a good mood and be uncharacteristically nice and kind. However, something as tiny as a pebble can break this mood.

His first appeared in the climax of the Restricted Rock, Paper, Scissors game where he comments on Kaiji's unique abilities to survive. He also serves as the climax antagonist of the first series, and since then has been the primary nemesis of Kaiji.

He meets Kaiji in the final segment of the first series of the manga, where Kaiji is selected by lottery to compete in the "Castle of Despair". Hyōdō's talents for winning in anything and everything have earned him the title of "king" by some, though others merely call him "very lucky". His first full manga appearance was in volume 8 - prior to that, all readers saw of Hyōdō was his finger tapping.

He won against Kaiji in the Tissue Box Raffle gamble, which resulted in Kaiji losing 4 fingers on his left hand. He managed to outsmart Kaiji by folding the winning lot in half while it was in the box, creating a crease in the center for him to find when it was his turn to draw the winning lot out. 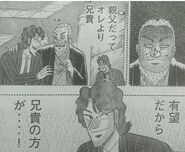 Hyodo with his eldest son, Kazuki.

A younger Hyōdō with his son Kazuya decades ago. 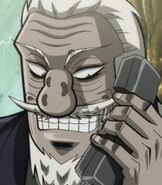 Hyodo drinking wine out of a bowl (poured by 3 blacksuits) before putting his feet in it.

Blacksuits being forced to drink wine from a bowl after Hyodo stood in it.

The rarest of all his expressions. 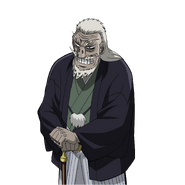 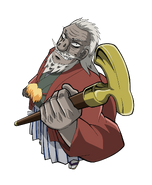 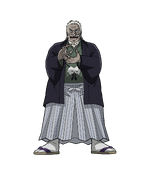