Jōji Funai (船井 譲次) is one of the veterans (or Repeater) of previous voyages on the Espoir. Funai is an excellent conman and uses the fears and worries of the other competitors to his advantage.

He can be considered the first main antagonist encountered in the Tobaku Mokushiroku Kaiji arc.

He "befriends" Kaiji during his first night and explains the unofficial rules to him, and the two agree to form an alliance - both will exhaust their number of gesture cards without having to lose any star pendants. However, at the last minute, Funai backstabs Kaiji and scams him out of two star pendants, leaving him with a single card and in a hopeless situation.

He is eventually forced to gamble with Kaiji and is defeated by him, losing five star pendants in a sudden death gamble near the end of the voyage. He is Kaiji's final opponent in Restricted Rock, Paper, Scissors while on the Espoir.

Similar to most of the participants of the gamble, he is never heard of nor seen again in the arc. Since he had 4 stars, it is safe to assume he wasn't taken to the back room.

9 stars he obtained through conning. 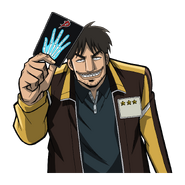