Gyakkyō Burai Kaiji: Ultimate Survivor (逆境無頼カイジ), is the adapted 26-episode anime television series based on first part of the manga (13 volumes), which began airing from October 2007 to April 2008.

Itou Kaiji is a bum who steals car emblems and slashes tires on what seems to be a regular basis. This routine changes one day when he is paid a visit by a man in a trenchcoat. Once the two get talking, it seems that the visitor (Calling himself Endou) is a debt collector. The reason for his visit is an unpaid loan which Kaiji had previously co-signed for a work-mate (Furuhata Takeshi). The original loan was ¥300,000 and once Takeshi had disappeared, the loan then fell on Kaiji.

Kaiji is then told of a way to clear the interest compounded debt (which stood at ¥3,850,000), which involved getting on a boat with others in his position. Once on the boat the debtors would then have to gamble with loaned money, which would end with a few winning, and others getting into deeper debt and having to work to pay of their debts. After some coercion Kaiji accepts a position on the boat, in order to clear his debt and make a bit of money as well...

This game took place aboard the Espoir ship after Kaiji accepted Endou's offer to spend a night on the ship. Initially, players borrowed up to 10 million yen to use in the game. Players need to return with a 1.5% interest rate every 10 minutes which equals 40 million in 4 hours (the game period). After they hand out the money, Tonegawa Yukio states the instructions. The game begins with every player having 3 stars and 4 cards of each type (Rock Paper Scissors). Players have to retain stars and get rid of their cards within 4 hours.

A few months after the rock paper scissors game aboard Espoir, Kaiji finds work when Endou comes to him again and ask him to spend another night at gambling to change his lifestyle. Reluctantly, Kaiji accepts his offer once more in the hopes that this time he will get his debt eliminated.

Only this time he isn't gambling just for money. He, and many others, are gambling for their very lives.

On the same night of the second game, Kaiji tries to avenge the death of his comrades by challenging Tonegawa in a game of E-card. Before playing E-card Kaiji had to have a certain amount of money, but ends up betting one of his ears due to his not meeting that amount. A small drill is put in place over his ear, Kaiji having to bet a certain distance the drill advances before it ruptures his eardrum. Each player must have 5 cards each. Four citizen cards must be kept at all times, one player must have an emperor while the other has the slave. This is how it works: citizen destroys slave, emperor destroys citizen, but slave destroys emperor, as it has nothing to lose.. In the process of the game, Tonegawa was revealed to be cheating so he could win and watch Kaiji suffer, an outcome Kaiji avoids on their 11th match where Kaiji outright slices his ear off. By doing this, Kaiji was able to win the game and gamble his way to ¥20.1 million.

After winning , Kaiji gets ¥20.1 million. However after Kaiji witnesses Tonegawa receiving the "Roasted Kneeling" as punishment for his loss against Kaiji, Kaiji realizes that the real enemy is the Chairman, Kazutaka Hyōdō. After weighing his options, Kaiji challenges the Chairman to a tissue paper raffle.The game is essentially a raffle with an originally sealed tissue box used for holding all paper chits. Chairman bets ¥100 million while Kaiji bets ¥20 million and four of his fingers. However, Kaiji has hidden a secret winning lot in the box so he could win on his first try.

After losing miserably and maiming his hand, Kaiji ponders over the situation and realizes that the Chairman, had annihilated his fake lot and put a mark on the winning lot by folding it so he could easily find the winning lot to win.

After the gamble ends, Kaiji heads to the hospital so his ear and fingers could be reattached, leaving a permanent mark of his defeat in the process. 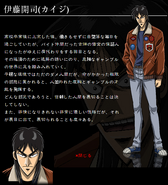 Retrieved from "https://kaiji.fandom.com/wiki/Gyakkyo_Burai_Kaiji_Ultimate_Survivor?oldid=6490"
Community content is available under CC-BY-SA unless otherwise noted.