The gamble appears in the Gyakkyō Burai Kaiji: Death or Survival video game.

The 12 matches is separated into 4 groups of rounds, with each group alternating which player is the Emperor Side. Each group of rounds are made of 3 rounds.

In the first of the 3 rounds the Emperor Side plays a card faced down first, followed by the Slave Side. Each card is then revealed and the winner decided.

If the outcome is a draw then the round continues to a second play with the played cards removed. Now the slave side will start by placing a card, followed by the emperor side.

If this play is a draw again, then the round moves onto the last play of that round - even if it is another draw Here the emperor side will place a card first.

Once the round is concluded, all played cards are collected and the next round starts, with now the Slave Side playing a card first (even if the previous round ended with the Salve Side placing first). If this play is a draw, the round continues to the next play, with the Emperor side placing first.

Once the second round is concluded, play out the third round starting with the emperor side again.

Again, the emperor side plays the first card in the first round (which will be the 4th round overall).

Once all 12 rounds have been played, you can determine a winner. 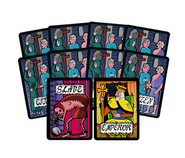 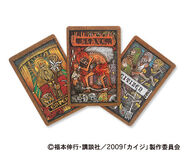 Promo art from
Chuukan Kanriroku Tonegawa.
Add a photo to this gallery

Retrieved from "https://kaiji.fandom.com/wiki/E-Card?oldid=7419"
Community content is available under CC-BY-SA unless otherwise noted.